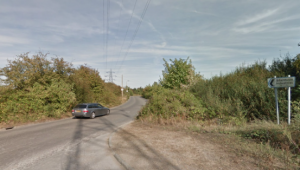 PEOPLE living in Stanford-Le-Hope are urging the council against approving plans which would allow HGVs moving in and out of an industrial park to be on the roads an hour earlier.

Councillors are due to discuss whether to allow lorries to operate from the Stanhope Industrial Park from 6am rather than 7am during a Planning Committee meeting on Thursday.

Ahead of that meeting, residents living near to the industrial park have written to the council to urge it to refuse the application.

In one letter received by the council, Steve Earle, of Wharf Road, said: “This application is asking for the so-called travel restrictions to be lifted.

“The traffic on Wharf Road starts long before 7am with employees racing down the road from before 6am, getting to work for a travel start at 7am.

“If the start time is moved to 6am that will mean traffic starting before 5am as employees arrive getting ready for work.

“If the return time restrictions are lifted that will mean that the constant traffic movements will go on way passed 8pm in the evenings making life unbearable for the residents of Wharf Road and Stanford-Le-Hope.

“That will have an impact on the general life and wellbeing of all residents in the area. The traffic and vehicle movement at present is not good for health, wellbeing and property value in the area throughout Stanford-Le-Hope and in particular Wharf Road.”

Paul Sear, also of Wharf Road, said: “The current agreement allows for a limited number of HGV’s in and out of the site between 6am and 7am, which was agreed a number of years back.

“This limit is regularly exceeded, and as a resident of wharf road, the excessive noise and disruption at such an early hour is not acceptable, and if this were to be opened up with no limit it would be very damaging to the local residents.”

The council’s planning officers have sided with the concerns raised residents, recommending that councillors refuse the change due to the impact it could have on those living on the nearby, particularly on Wharf Road.

In a report published by the council ahead of Thursday’s meeting, officers wrote: “The information put forward is limited and does not provide any substantial justification for an extension to the hours.

“The 6am to 7am time period is one in which residents could reasonably expect low levels of vehicle moments and no disturbance to sleep from large vehicle movements.”

They continued: “The proposed extension to the hours of operation is undesirable and would result in additional large-scale vehicle movements which would be harmful to the amenities and living conditions of the nearby residential occupiers in Wharf Road.”

A final decision will be made at the planning committee on Thursday.