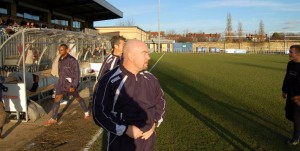 Grays Athletic have announced the appointment of Craig Edwards at the 1st Team Manager, Craig has joined the club on a non-contract basis. He takes over from Gary Phillips after stepping down as boss of Ryman Division One side Dulwich Hamlet last month.

Craig managed Grays before he was replaced by Mark Stimson when Grays were in the Conference South. He got the team to sixth place in the league that year. The announcement comes as a surprise as most fans were not expecting a decision until the clubs AGM. Most fans have shown support to popular boss Gary Phillips and will be relieved that he is staying on as coach.

Craig has previously been in charge of Barkingside, Barking, Redbridge, Chelmsford City and Dulwich Hamlet; he will be assisted by two coaches, Gary Phillips and Steve Brown.

Physio, Becky Nutt, will remain at the Club.

The Club will remain full-time but the manager will have to remain within a strict budget.
The Club will move their training to the Aveley Sports & Social ground and will creating an Academy for the youth section of Grays Athletic at Aveley with the view to raising the youth players through to the 1st Team.