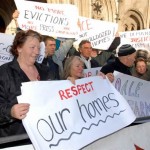 Thurrock Council’s Cabinet has unanimously rejected Government plans to more than double the number of traveller and gypsy pitches in the borough and earmark Thurrock as a possible location for a gypsy transit camp.

New proposals by the Secretary of State would add 44 new pitches in Thurrock within two years and more than double the number from 80 to 167 by 2021.

The proposals also include the potential of a new transit site being built somewhere in Thurrock.

Leader of the Council Cllr Garry Hague said: “We have made it perfectly clear that we don’t support the building of a transit site in the borough and we consider the provision of sites within Thurrock is already more than generous and sufficient for the foreseeable future.”

He added: “We have made our objections known throughout this review process and have requested that there be a far more fair and equal distribution throughout the East of England than that proposed.

“Thurrock has done a good job on provision of pitches, we provide a good service. It is time for other areas to do their bit now.”

He added that this is not a case of “not in my back yard”, it is a case of fair and equal distribution.

Members were told that the formula used for working out how many extra pitches were needed was based on the number an area already had — as Thurrock provided a large number now, the formula meant even more should be built.