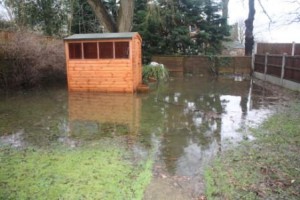 ECFRS Control operators and fire crews have been working through the night dealing with nearly 200 flood-related incidents since early afternoon yesterday. Incidents were spread across the county but Billericay, Basildon and Thurrock appeared hardest hit. The busiest period came just after 18:00 hrs and continued throughout the evening into the early hours.
At 05:30 hrs this morning, ECFRS Control reported calls were finally beginning to stop.
Last night, there were numerous calls in Brentwood, Harlow, Aveley, South Ockendon, Grays, Chelmsford, Epping, Loughton, Clacton and Walton.
Billericay saw a number of calls in a few hours, with 10 homes in Carlisle Gardens being affected by flood water, along with Mayflower School in Stock Road. Three floors of the school were affected and firefighters used a light portable pump and an aquavac to remove the water. Crews were preparing to leave the incident at 20:55 hrs.
At 19:45 hrs last night, four appliances and an aerial ladder platform were in Hockley Road, Basildon, after lightning struck a house and set it alight. Crews reported that the roof void of the mid terraced property, measuring 10m x 10m, was well alight. Firefighters wearing breathing apparatus used three hose reels and one main jet to tackle the incident.
At 20:12 hrs, crews reported that the fire was surrounded and firefighting operations continue to bring the incident under control. This incident was dealt with by 20:55 hrs.
At 20:20 hrs, crews were called to Richmond Drive, Rayleigh, after lightning struck a roof. Another house was struck by lightning in Robin Hood Road, Brentwood at around 20:48 hrs. There was no sign of fire when firefighters arrived.
Lightning struck a chimney in Stifford Clays, leaving it hanging in a precarious position. Other calls included trees and undergrowth alight after being struck by lightning.