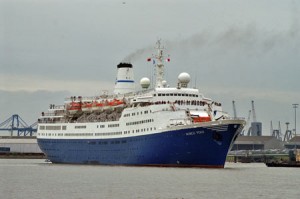 Over 200 passengers on the Marco Polo cruise ship have now shown symptoms of the vomiting bug, norovirus.

When the ship left Tilbury a few days ago it had already had a health scare after a small number of passengers were laid low suffering symptoms of gastro-enteritis during a previous cruise to Iceland.

The ship was given a clean bill of health by the Port authorities on turnaround before it aimed to head for a tour of the British Isles.

A postmortem is to be carried out on a man who died yesterday during the suspected norovirus outbreak.

Roy Sillett, 74, is believed to have died after suffering a heart attack, but the examination will determine whether there is any link with the suspected norovirus, also known as the “winter vomiting bug”.

There were 769 passengers and 340 crew on board and those not showing symptoms were let ashore in Scotland today.