The villages of Orsett and Bulphan are gearing themselves up for a major fight with planners over the possibility of a new road linking the M25 and the M20.

Option C route would mean a six lane motorway being cut through the existing Orsett Cock ,then behind Rectory Road and across Conways Road before going across the fens to the M25.

Angela Smith has said the following on her website:

“It may be helpful if I make clear that, in the current economic situation, any new crossing is a long way in the future, and my first priority is to push the Department to do what it can to alleviate congestion at the current crossing.

I have included in my representations a request for an investigation into whether a camera-operated toll system is possible to avoid the toll booths, as happens with the congestion charge in London, which was raised by an Orsett resident.”

Orsett Councillor Mike Revell has also commented. He said: “Immediately I became aware of the Government proposals for the new Thames crossing I commissioned a summary report.

This report I gave initially to the Chairmen of the three village forums. At their meetings an initial discussion was held as to the way forward and I understand the matter is being discussed in detail at their next meetings.

Meanwhile my fellow councillor has asked the relevant question at last week’s Full Council and in reply the Leader do the council has given his full support against option C.

There some additional work in progress to find the true feelings of the residents on this proposal. That I will report on shortly. My feeling is that the residents of the Orsett Ward will be very strongly against.”

“With regard to the new Dartford crossing the main cause of delays as I see it on the present crossing is the collection of the tolls. In my opinion all tolls should be abolished, all the toll booths, barriers, etc should be removed so that the traffic can flow freely through this bottleneck. Obviously the government at that time did not allow Essex and Kent to continue with the ownership of the tunnel and in an attempt to get the bridge built with private money handed the ownership over to Trafalgar Group who at that time owned the Cleveland Bridge Company, who built the bridge.”

This story is going to escalate and yourthurrock will be following closely.
The image has been drawn by a Orsett Resident showing Option C 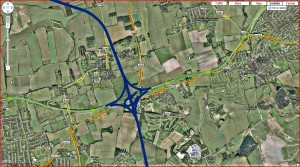 One Response to "Orsett Prepares for Battle"