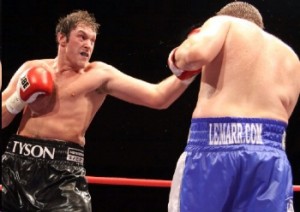 John Mcdermott fans erupted with fury after he lost his English heavyweight boxing title on points against giant Tyson Fury at the Brentwood Centre on Friday.

The referee gave the much hyped Fury the title by four rounds, a decision met with open mouthed astonishment not only by the packed crowd but by the Sky Sports commentary team that were recording live from the Essex venue.

Many had expected the young and much hyped Fury to dispatch Grays man John In four but the big mac was not for shifting and soon had the measure and range of Fury that led many to believe he was home and dry.

This is not the first time that this has happened to Mcdermott. He lost a British heavyweight title bid to Danny Williams in exactly the same situation but as before gentleman John met the decision with good grace and dignity

A source close to the Mcdermott camp said. This was an outrage and can do nothing for the reputation of boxing

Both camps have called for a rematch