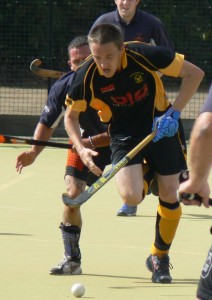 Thurrock played their second pre-season friendly at home to Div 3 rivals Clacton. It was Clacton who started brighter and opened the scoring with a goal on 25 minutes.. Not many chances for Thurrock in the first half but Andre Rudder could have levelled things just before the whistle when his shot clipped the outside of the post. After the break Thurrock changed the team about and looked a lot more organised. Jacob Agoro levelled things from a short corner and shortly after Matthew Gaut put the T’s in front with a well worked move. Clacton equalised but it was Thurrock who had the last word when Declan Milane played in Michael Murray to set up Matthew Gaut for his second of the match. Andrew Sargeant was named Man of the Match for another great performance in midfield.
Next Saturday they face Waltham Forest away 2.30 start in their last friendly before the start of the league season.

Due to a shortage of players, Thurrock 3s who normally play in Division 9, had to cancel their own game and take the second team friendly fixture against a Southend team who missed promotion from Division 5 last season on goal difference. The home team pushed forward from the first whistle and Thurrock had to work hard to keep them at bay. After 10 minutes a well-worked move on the left wing led to a cross and a goal from the edge of the area that left stand-in keeper Rick Clubb no chance. Thurrock fought back with James Martin linking well with Jimmy Venus to move the ball into the Southend 25 metre area. However the defence were well drilled and the ball was quickly cleared and sent up the field to outwit Thurrock’s defence and produce a second goal after 20 minutes. Southend got a third goal two minutes later from a short corner which was flicked towards the roof of the net only for Clubb to dive full length to stop the ball. However the ball fell perfectly for the speedy attacker to score from close range. Thurrock were under constant attack and conceded a fourth goal when Southend took full advantage of the new rules to take a quick free hit and pass to an unmarked attacker who scored from close range. In the final minute of the first half a weaving run by Gary Venus led to the award of a short corner which was converted by Dave Shatwell. The goal inspired Thurrock and they came out strongly in the second half and put the home defence under some pressure with both Tom Madden being unlucky not to score when he cut in from the right and hammered the ball inches wide with the keeper flat footed. After 45 minutes as Thurrock continued to dominate the game, a pass was intercepted and the quick- thinking Southend half-back sent the ball through the air to pick out the centre forward who hammered the ball into the net. With five minutes to go Southend were awarded a short corner which was converted to produce a sore which far from reflected the sterling effort of the Thurrock