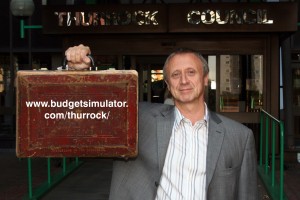 Thurrock Council are giving residents a chance to have their say on how, where and when their money is spent over a financial year

Over the next few months officers and councillors will be looking at the priorities for the 2010/11 budget and, like authorities across the country, some difficult decisions will have to be made which will impact on next year’s Council Tax.

That is why it is important that residents have some input on the decisions that are to be taken.

This year residents are being invited to make their comments online at a specially developed “budget simulator” via the council’s website.

The simulator is an interactive system allowing residents to suggest where money should be spent by the simple click of a mouse. There is also the opportunity to make comments.

The figures involved are based on last year’s spend by Thurrock Council and the simulator gives those taking part a chance to highlight areas of spending where they think the money should go.

Clicking on a service name gives background information, then boxes should be clicked to allocate more or less of the budget, compared to the previous year’s spend.

Once those taking part have agreed their proposed budget, they can review their decisions and finish.