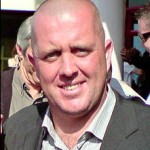 yourthurrock will be interviewing tomorrow.

Within minutes of the announcement Grays fans on the unofficial fanzine were giving the news a mixed reaction.

Dicks played left-back for Birmingham City, West Ham (twice), Liverpool and Canvey Island. He was known as a “hard man” (his nickname was “The Terminator”) and tough tackler in possession of a cultured left foot and a fierce shot in regular demand as a penalty and free-kick taker. He scored 10 goals for West Ham in the 1995-96 season, which is the best return for a defender in the Premier League. He was voted West Ham’s player of the year four times between 1990 and 1997.

He started his footballing career at Birmingham City, joining them as an apprentice in 1985, and had turned professional when West Ham bought him for £300,000 in 1988 and gave him the chance of First Division football that Birmingham’s relegation in 1986 had denied him, and although they were relegated in his first season at Upton Park, he helped them win promotion two years later.

Dicks was often cautioned and sent-off by referees. His first red-card was in a match versus Wimbledon in the Football League Cup in the 1989-90 season. It was an infamous encounter which included an on-pitch brawl between the opposing players. The following season Dicks first sustained the knee injury that would eventually end his career. Indeed, Dicks recovered from the injury remarkably quickly and returned in the second half of the 1991-92 season and was made captain of the side, when still only 23. But, despite his presence, the team finished bottom of the First Division and missed out on the first season of the Premier League.

The 1992-93 season was an eventful one for Dicks, mainly for the wrong reasons. He was sent off three times and picked up a string of bookings which saw him miss significant periods of the season and he was subsequently stripped of the captaincy of West Ham by manager Billy Bonds. One notable challenge for which he was sent off was on Derby County midfielder Ted McMinn. Despite this, he earned a Division One runners-up medal as West Ham reached the Premier League.

Liverpool manager Graeme Souness bought him in 1993 in a swap deal which involved David Burrows and Mike Marsh moving to West Ham. Dicks was not a success at Liverpool and he transferred back to West Ham after just one season, although Dicks has the honour of being the last Liverpool player to score in front of the standing Spion Kop in a 1-0 win against Ipswich Town near the end of the 1993-94 season.[1]

On re-signing Dicks, manager Harry Redknapp commented that he believed that his chairman thought he “was off his rocker” because Dicks was considerably heavier than when he had departed for Liverpool a year earlier. Dicks played a major part in helping to keep West Ham in the Premier League in 1994-95 and again in 1996-97, including scoring twice in a pulsating London derby against Tottenham Hotspur at The Boleyn Ground that West Ham won 4-3. In 1995-96 he was the club’s joint top Premier League scorer with 10 goals as they finished 10th – their highest final position since 1986.

Another knee injury resulted in him missing the entire 1997-98 season. He did return to action in the 1998-99 season and West Ham finished fifth to qualify for the UEFA Cup, but his injury problems failed to go away and he was restricted to just nine Premier League games. West Ham then terminated his contract and he retired from professional football after a 14-year career, 11 years of which had been spent at West Ham. In two spells at West Ham, he had played 315 competitive games and scored 64 goals, many of them penalties.