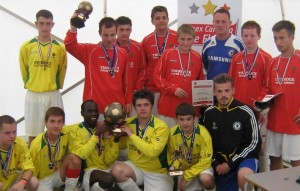 Weeks of hard work paid off on Sunday (August 30) when young people from Thurrock won the Baddow Football Festival for young people aged 16 to 21.

Under the banner, ‘Essex Carrying the Flame’, the event was held at Great Baddow High School, Chelmsford and was organised by Essex Aftercare Team in association with Chelsea FC.

Thurrock’s teams had been training together as part of a community inclusion project, aimed at bringing together care leavers with other young people from the borough.

The weekly training sessions were set up by Thurrock Council’s Leaving Care Team and coached by staff from Chelsea FC.

Several six-a-side teams from all over the county entered, including the two from Thurrock. Both teams got through to the final, resulting in both winners and runners-up trophies. The icing on the cake came when Matthew Hunt, a sixteen year old from Grays, won the ‘Player of the Tournament’ trophy.

Cllr Sue MacPherson, Thurrock Council’s portfolio holder for Children’s Social Care said: “On behalf of the council I would like to say a big thank you to the organisers and we are very proud of every single one of the players, who showed that determination, team spirit and a good attitude can bring results.”