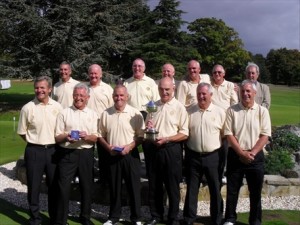 With the match starting at 08.00 hours it was an early start for both teams with coaches leaving their relative clubs at 06.30 hours.

As expected Thorpe Hall proved to be very tough competition having won their semi final match 8 – 3.

As in previous rounds, we were giving shots in all but one match which proved difficult and after 6 matches we were trailing 4 – 2.

A major turning point however was, after sinking a great putt on the 17th to halve the hole, Ted Eustace hit an amazing 3 wood from deep rough to the middle of the green to secure a victory 1 up. Ted remained unbeaten throughout the whole competition.

Dave Turner again played very well with a 3 – 2 victory which evened the team scores at 4 – 4. There was howver still a lot to do and Colin Page came from 1 down playing 18 to halve his match with a solid par.

Tony Allen, also unbeaten throughout the campaign, produced his usual solid performance with a fine 2 – 1 victory and Bobby Page as expected played very well with a fine win 4 – 3.

The final score 6.5 to 4.5 was a tight but a well deserved victory. The key aspect of this final was the spirit in which it was played and a credit to both teams.

Thanks from the Captains Bob Smith and John Harrison, go to all the squad players for their dedication throughout the competition, their caddies who often remain the unsung heroes and especially the supporters who followed the team throughout the campaign.