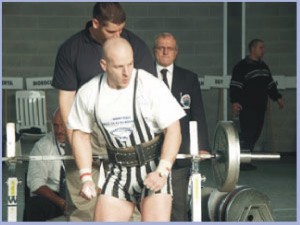 LA Muscle sponsored Mike is 38 years old and can see no reason why he can’t make it into double figures next year. Mike said: “I feel as strong as ever and despite some long term injuries I am now on the mend and looking forward to next year”.

The competition was originally due to be held in Italy, however after the Italian federation fell out with the world governing body (WDFPA) England stepped in at the last minute to host the event.

Mike competes in the 82.5kg weight category and came in very light at 80.3 kg in a heavily contested class containing 21 of the worlds best lifters.

Mike who currently holds the world record with a hefty 200kg (almost 31.5 stones) was still recovering from long term injuries and opted to lift a much lighter weight for his opening lift: “I wanted to ensure that my shoulder held out ok and had missed a lot of training so needed to make sure I got a good lift in” mike said and he comfortably lifted the 175kg without aggravating the injury.

This first lift gave Mike a good chance of winning the title as the next nearest opponent Cedric Kwiecien, aged 28, from France lifting 160kg with his first lift.

Cedric then pressed 165kg, followed by Mike easily getting 180kg, for his final lift the French lifter failed with an attempt and 170kg, handing Mike the victory.

There was still much resting on the last lift as Mike having already now won his weight class turned his attention to the “champion of champions title”, this title is awarded to the best lifter on the day across all weight classes when taking into account bodyweight by using a formula known as the “Schwartz formula”.

With over 150 lifters competing for the best lifter title, the competition was always going to be tight, with this in mind Mike chose his final lift carefully and elected to attempt 185kg, although somewhat below his best lift this would give him a good chance of winning whilst also being fairly sure he could lift it successfully.

The lift was fairly comfortable and all Mike could do now was weight for the other lifters to finish their lifts before finding out if he had won.
Mike came out on top beating fellow Brit Chris Baker by 2 points to secure “Best Lifter 2009”.