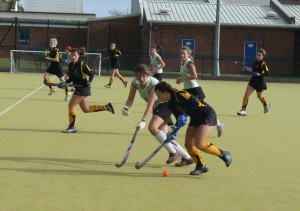 Thurrock Ladies I 5 – 2 Cambridge University
Thurrock gained their first win of the season with a 5-2 defeat of bottom of the table Cambridge University. Despite early pressure from the home side it was the students who took the lead from a penalty corner. Tees responded well and their attacking play finally got its reward in the first half when a quickly taken free hit found Nicola Pugh who drove into the D and passed for Alison Bonner to score at the near post. With the half time score at 1-1 Thurrock were confident that they could push on and win the game in the second half. After a strong run by Katie Jacks, a penalty corner was awarded to Thurrock and a well worked move between Miriam Nichols and Pugh was deflected in by Louise Pike for Tees to take the lead. Another strong run, this time by Nichols resulted in a penalty stroke being awarded which was well dispatched by Pugh for the third time this season. Thurrock were clearly on top of the game now and scored from two further penalty corners, Pugh and Nichols the scorers. Right at the death, Cambridge scored their second goal of the game at the third attempt despite two good saves from Thurrock goalkeeper Karen Richardson. The final score was 5-2. Hopefully Thurrock can now maintain this good form as they travel away to Bromley & Beckenham for a crucial game this weekend. Player of the Match was Miriam Nichols who terrorised the Cambridge defence with her attacking runs throughout the whole game.

Our first win of the season came against a strong Old Loughts side. A goal after 12 minutes from Katie Johnston inspired a strong team performance in the first half. The second half was equally competitive and Katie Johnston’s second goal from a short corner after 47 minutes put Thurrock 2-0 ahead. A spirited fight back from the opposition resulted in them pulling a goal back, but Thurrock held on, and five minutes from the end a speculative shot into the D went in off Becky Grants stick resulting in a well deserved 3-1 victory.

Next Saturday Ladies II away to Crostyx II

Following their heaviest defeat for sometime against Plashet the week before, Thurrock struggled to get in to their slick passing to turn defence into attack. Through their eagerness to score Thurrock pushed too many players forward leaving gaps in defence and inviting Upminster to attack on the break. Then midway through the first half Upminster launched an attack and Thurrock were 1-0 down. Thurrock picked up play and at the end of a number of successive short corners, Jacob Agoro lifted the ball into the net, the score was 1–1 and the whistle went for half-time. This was a tough game with both sides playing competitive hockey but Thurrock upped the pace in the second half making a number of good breaks from midfield, then Matt Gaut broke through the Upminster defence only to be brought down by the goalkeeper, the umpire immediately awarded a penalty flick, up stepped Jacob Agoro and Thurrock were in the lead. Upminster put everything into attack pinning Thurrock into their D then, in the final minute of the game, Upminster scored and the game ended in a 2-2 draw.

Next Saturday home to University of Essex, 11 am start

In the early stages, the home side played the better hockey and defenders Rick Clubb, George McAllister and debut-player Sam Webb had to work hard to hold their line. After 15 minutes a cross was cut out by McAllister who sent the ball up the field for Michael Fleming to beat the full back before centring to Jimmy Venus who slipped it inside the post to give Thurrock the lead. Thurrock were inspired by the goal and took command of the game forcing the home keeper to make a string of saves. With five minutes left of the half Liam Appleyard weaved made a run on the right and then cut inside to pull the keeper out before making an inch perfect pass to Fleming who flicked into the net. A rearranged formation in the second half by Upminster saw them regain the upper hand to pen Thurrock into their own area forcing them to concede a series of short corners which were scrambled clear. After 45 minutes, Thurrock were found wanting in defence when a half-hit ball was not cleared allowing Upminster to score a goal from close range. Upminster continued to dominate the game and the Thurrock keeper had to make a string of athletic saves to prevent the equaliser. After 55 minutes a rare Thurrock break saw Fleming move the ball up the field where he wrong-footed the defender and then passed for Matthew Skinner to score his first league goal as he hammered the ball from the edge of the area to extend Thurrock’s unbeaten start to the season.
Next Saturday Mens III have a friendly against Romford III at Palmers, 3.30 start.

Wapping VI 4 – 0 Thurrock II
The scoreline didn’t do Thurrock justice, a great deal of time there was little difference between the two sides even though the T’s side was composed of mainly up and coming young players. Both played good hockey at times, moving the ball around well. The only difference was Thurrock’s inability to get the ball to the forwards quickly enough and then to get into good scoring positions. Too many times hitting a long ball from the back to the front and straight to the opposition. When playing hockey with passing from one player to another looked good. There were still plenty of opportunities but they couldn’t make anything of them.
Next week home to Brentwood IV, 2.30 pm start