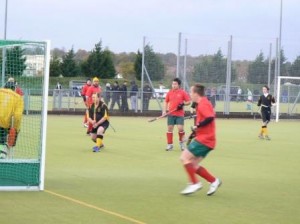 Thurrock vs East London is always a great tie, and this was no exception. They occupy second and third places in the table with the same points but Thurrock have scored more goals to put them second.

With the wind roaring around and the rain and hail tipping down Thurrock started the brighter of the two teams with early opportunities falling to Steve Abbott and Matt Gaut, but it was East London who broke the deadlock by hitting T’s on the break to score from the top of the D.

Thurrock got back into the game and played some great hockey then they broke down the left wing and Matt Gaut luckily looping the ball over the keeper and into the top corner. After half-time both teams started strongly, but it was the home side that scored first from a well worked goal.

However Thurrock replied soon after with a well worked passing from Andrew Sargeant and Stephen Edwards, finished off by captain Steve Abbott making it 2-2. The home side then once again got themselves back in front, with the rain in the keeper Andy Gaut’s face, East London slipped the ball into the bottom corner, 3-2. Thurrock then dug deep with the defence of Tommy Ing, Luke Danbrooke and Jorden Salmon pushing forward, linking with Andre Rudder and Stephen Edwards. With a disallowed goal from from Andre Rudder, a short corner was stopped on the line by the foot of an East London player producing a penalty flick. Man of the match Steve Abbott stepped up to make the score 3-3. T’s then took the sting out of the game with some great hold-up play from Nick Stapleton and Matt Leaver.

Thurrock jumped two places and pulled themselves further away from the relegation places on Saturday, with a hard fought victory in appalling conditions away to Redbridge & Ilford in their NE14 Hockey division 6 match. The home side’s captain won the toss and elected to swap ends, making Thurrock play into the wind in the first half. The T’s defence didn’t look as comfortable as they had in recent weeks, and could have found themselves behind early on, but for some weak finishing. Centre back Gary Ginsburgh was lucky to escape with just a warning from the umpire for a bad stick tackle in the D, but the resulting penalty corner was saved comfortably.

Thurrock didn’t get many chances in the first half, but when Gary Tredgett passed firmly into Redbridge’s D, Ashley Snell wasn’t going to turn down the chance for his second goal in two games back from being injured.

The second half saw Thurrock dominate in the middle of the pitch, but for all of Tredgett and Declan Millane’s possession, they couldn’t get past the home side’s keeper.

Thurrock keeper Keith Mager only had one save to make in the second half, until with five minutes left, when in desperation Redbridge threw men forward, but they couldn’t get a clear shot on goal thanks to dogged defending by Ginsburgh, Ben Knowles and Kevin Appleyard. Young Oli Smith played well in his first game for the IIs, but man of the match was 40-year-old Gary Tredgett.

The IIs are at home to Southend on Saturday at 12.30

Thurrock were the stronger team in this NE14HOCKEY sponsored Div 9 SE game and from the start moved the ball around the pitch with Tom Madden, Liam Birch and Matthew Skinner linking together in midfield to provide potential scoring opportunities for forwards Michael Fleming and Lawrence Smith. The rare attacks by Witham were dealt with by defenders Sam Webb and George McAllister with Jordan Salmon mopping up any breaks. Thurrock were unable to convert their dominance into goals as the home defence held firm with the keeper making a string of last minute saves to make the game scoreless at half time.

Thurrock continued to apply pressure in the second half and eventually were rewarded when Lawrence Jackson made a run through the middle before passing to Birch who knocked the ball through for Fleming to beat the keeper and score. A change of formation by both teams saw Witham claim the initiative and Thurrock were forced to defend in numbers to maintain their lead with keeper Declan Salmon making some timely saves to ensure that Thurrock claimed maximum points.

Next week Thurrock are hoping to be the first team to take a point from Old Loughtonians Academy at 11 at Palmers.

Ladies I
Did not play. Next Saturday away to Wapping I

Ladies II
Harlow 3 – 1 Thurrock II
This match illustrated how much progress we have made this season in the higher division. We dominated a very strong Harlow team for most of the match, but failed to capitalise in front of goal. A very bright opening period saw us go close on two or three occasions. Harlow then had a succession of short corners from which they scored three times.

A rousing half time team talk and some inspired tackling early in the second half lifted our play to a new level. Definitely our best 35 minutes of hockey this season capped by a tremendous goal from Karen Lucking.
Next week home to Wapping III

Ladies III
Next Saturday away to Oakway