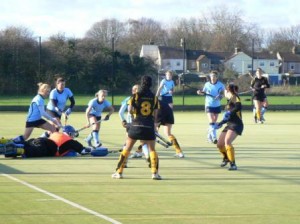 Ladies I
Thurrock Ladies I 0 – 3 Maidstone Ladies I

Thurrock’s three game unbeaten run game to an end against visitors Maidstone in this NE14 Hockey sponsored East Premier League match. Maidstone’s early pressure eventually paid off with two goals in quick succession in the middle of the first half. The home side then exerted some pressure of their own with Miriam Nichols making some dangerous runs into the opposing ‘D’. The score remained 2-0 until half time with Thurrock dealing effectively with any Maidstone attacking threat. At the start of the second half, Thurrock began to exert some pressure of their own, but could not quite find the finish to their attacking play. Unfortunately, the visitors then claimed their third goal to put the game beyond Thurrock. The home side showed a real battling determination in the second half in particular against a team who were playing National League hockey last season and they can hopefully take this into a crucial game against Saffron Walden away this weekend. Player of the match was Louise Parrott for both her resolute defending, but also her attacking play down the right hand side.

An outstanding team performance bought our fourth win of the season. A very even first half saw us go one down to a scrappy Redbridge goal, but a very positive half time talk saw us take complete control of the second half. We equalised with a well struck goal from open play by Ali Bonner seven minutes into the second half. We continued to exert our pressure and went into the lead 10 minutes later from a short corner. Despite a spirited finish from Redbridge which saw the Thurrock goalkeeper make an outstanding save, we held on to win 2-1.

Next Saturday home to Colchester II, 11 am start at Palmers

Ladies III
Next week away to East London II

This NE14HOCKEY sponsored Division 3SE game could be broken down into three, or one half and two quarters. The first half was end to end, full on and a little heated at times with the umpires having to be on top of the game to keep control. By half-time Thurrock were just the better side. The next 15 to 20 minutes was one of total command by T’s with Crostyx being given the run around, chasing shadows. Everything Thurrock did came off and and they couldn’t do a thing wrong, scoring five goals and could even had more. The last quarter of the game was one of containment, taking it a little easier with the game won, they were in total control. Considering they comfortably beat the team one place below them, third in the table, it gives the win a greater significance.
Thurrock started the game the best team and were unlucky not to take the lead in the opening two minutes after Steve Abbott found himself with an opening but shot just wide of the goal. The pressure continued from Thurrock and they finally took the lead after Gary Tredget used his skill to go past three defenders and then smash a shot into the roof of the net, but almost straight from the restart Crostyx caught the defence sleeping and equalised. Thurrock took the lead for the second time from a trade mark Jacob Agoro drag flicked short corner giving the keeper no chance but Crostyx again levelled the score just before half time. At the start of the second half Thurrock pressed forward and scored five goals in fifteen minutes to take the game out of reach from a shell-shocked Crostyx. The first came from a hit into the D from man of the match Steve Edwards for Matt Gaut to get a touch on the ball to take it past the keeper and then some good build up passing left captain Steve Abbott a simple tap in. Top goal scorer Gaut got his second of the game and 17th goal in 10 games from another Edwards hit into the D. Then Edwards scored with a well struck hit from the top of the D, Abbott then scored Thurrock’s seventh from a short corner. They continued to press forward but were hit on the break from Crostyx to get a goal back which gave them some hope and got another goal from a short corner but Thurrock withheld some pressure late on to stay second in the league.
Next week Thurock host Chelmsford III at Palmers College, 12.30.

In this NE14HOCKEY sponsored Division 6 game Thurrock went to Essex University on a buoyant mood after winning the last three games in a row, however they came up against a strong university side with the T’s only having 10 men. Thurrock made a shaky start going 1-0 down within the first 10 minutes, towards the end of the first half Dave Shatwell placed a magnificent shot in the back of the net allowing them to go in at half-time 1-1.
The university started strongly in the second half scoring two quick goals, then Thurrock got the momentum back by pushing the ball forward and eventually received a short corner which was converted by Mike Murray. Thurrock kept that momentum up but unfortunately conceded a fourth goal leaving the score line at 4-2 to Essex University.
The man of the match was decided by Essex University due to a tie in the scoring by Thurrock and man of the match was Liam Appleyard.
Seconds are playing at home to Romford at 2 pm Saturday

Thurrock dominated this NE14HOCKEY sponsored Division 9 game but in the end were lucky to claim the points. Thurrock went on the attack from the whistle and only some outstanding saves by the home keeper prevented them scoring. Eventually a Tom Madden gained a reward for his hard work when he collected a pass from Matthew Skinner and dribbled around the keeper before scoring. However the scores were soon level as a rare breakaway by Romford led to a half-hit shot which trickled past Thurrock keeper Declan Salmon and over the line. Thurrock continued to play the better hockey with midfielders Liam Birch and Lawrence Jackson intercepting Romford passes and providing ammunition for attackers Michael Fleming and Harry Holloway. After 20 minutes Thurrock regained the lead when Fleming collected a pass from Lawrence Smith and hammered the ball into the net. Unfortunately, a missed tackle allowed a Romford attacker to squeeze the ball inside the near post to make it 2-2 at half time. Romford were buoyed by their goal and attacked strongly in the second half forcing Salmon to make a string of last minute saves. Thurrock began to take control of the game and make the home defence work hard to keep them at bay but found themselves behind when a defensive hit out was sent up the field. and flicked into the net from close range following a defensive error. A change round in Thurrock’s defence saw them become much stronger and a hit out by George McAllister was pushed on by Madden for man of the match Skinner to beat the keeper and level the score. Thurrock continued to hold the upper hand but could not breech the Romford defence until the final minute when a Romford attack was intercepted by Skinner who then ran the ball through the middle of the field before providing an inch perfect pass to Madden who dribbled through the defence to give Thurrock the winner.

Next week Thurrock play second in the table Old Deferrians at 3.30 at Palmers