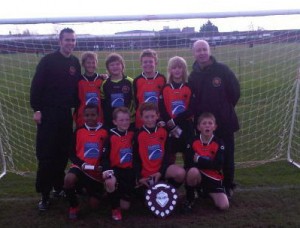 Thurrock Primary School’s District Football Team claimed their first piece of silverware of the season when they won the Essex regional round of the National 7-a-side championship. Having only been together for a matter of weeks, the team, who are made up from the best players from Thurrock’s Primary schools, competed against other district teams from Essex. They triumphed in the final against Barking and Dagenham in a closely fought match.

Kevin Watts, joint manager said ‘It is a fantastic achievement to represent Essex in the next round of this National competition. We now have to play in the south of England finals which, if we are successful, we then play the National final at Wembley before a schoolboy International. The players have much to play for and are looking forward to the challenge of playing the best teams from Southern England.’

The District Team, who are sponsored by Thurrock Tankers and Thurrock Thames Gateway Development Corporation, have started off the season well with four wins, one draw and only one defeat. They are improving with every game and have high hopes to add to the league title that Thurrock won last year.

John Bryant, joint manager said, ‘We have a great group of boys who are beginning to play well together as a team and are representing Thurrock with great pride.’.