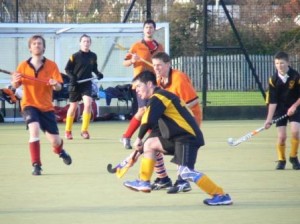 This was the first match of the second half of the season and Thurrock managed to carry on where they started against a strengthened Brentwood side.

Thurrock started of the brighter team by working hard and very quick passing of the ball which, after a well worked move, led to Steve Abbott shooting into an open goal to start off the scoring. Thurrock then started to get into a good rhythm with the defence of Jorden Salmon, Tommy Ing, and man-of-the-match Luke Danbrook kept the ball well and releasing it to the midfield quartet of Jacob Agoro, Stephen Edwards, Nick Stapleton and Andrew Sargeant quickly to hit Brentwood on the attack. By doing this Thurrock were awarded a short corner which Jacob Agoro converted to get his 12th goal of the season. Brentwood then hit back and made it 3-1 at half-time. The second half was a much tighter game with Brentwood stepping up a gear and Thurrock just could not convert their opportunities. Brentwood then scored to make it 3-2 but Ts kept pushing when another well-worked short corner put Nick Stapleton in at the back post, 4-2. Thurrock then got back into their stride, but faced with the best opportunity of the game, top scorer Matthew Gaut just could not convert leaving the final score was 4-2. Thurrock are currently second in the league going into the Christmas break with the top three moving away from fourth in the table Crostyx who lost for the third time in a row.

The 2s went to South Woodham Ferrers on Saturday as firm underdogs, Old De Ferrians are a team who should be at least three divisions higher, and who had won all of their previous matches this season, scoring double figures on no fewer than six outings. This Thurrock side weren’t going to roll out the red carpet though. This was a team totally transformed from the one given an 11-1 drubbing on the opening day of the season in the reverse fixture, and they gave their unbeaten opposition the biggest scare of the season so far.

Thurrock were desperately unlucky to concede two minutes before half time, having had three good chances to take the lead earlier in the half. Early pressure in the second half saw the home side gifted a goal, doubling their lead to 2-0, but Thurrock didn’t let the pressure get to them. Michael Murray pulled one back and Old De Ferrians were rocking for the first time this season. The two sides both upped their game, the impetus switching again and again until a neat lay off gave the home striker a clear shot on target, which he buried to restore his team’s two goal advantage.

The black shirts of Thurrock poured forward, forcing their opponents into giving away penalty corners, and it was Murray who capitalised, spotting an opening in the bottom corner, and finding it instinctively to once more bring the T’s to within a goal.

Still the red’s rallied, and the pressure led to their fourth, but they couldn’t keep the T’s down, even after the influential Ashley Snell limped off to be replaced by 13 year old Liam Appleyard. New boy Jonathon Boyd and tough tackling Gary Venus gave their opposite numbers a torrid time all game, as did man of the match Gary Ginsburgh, but it was Murray once again doing the damage when the 2s were awarded a penalty flick for denying a certain goal.

At the final whistle it was the home side who took the 3 points, but it was Thurrock who held their heads highest.

In their last NE14HOCKEY sponsored Div 9 game before the break, Thurrock faced a strong East London side that moved the ball around skilfully and were on the attack from the first whistle. The Thurrock defence worked hard to keep them at bay with keeper Declan Salmon making some outstanding saves.

After 20 minutes, however the visitors claimed the lead from a short corner that was flicked into the roof of the net. Thurrock battled to get into the game and Michael Fleming was unlucky to see a shot rebound off the post having beaten the keeper. Continued hard work by Thurrock maintained the score at 0-1 at half time. In the second half East London continued to be the strongest team and added to their score after only five minutes from a well worked short corner routine which resulted in the ball being slipped through the gap between the post and the defenders stick.

Thurrock’s woes were compounded within minutes when a mishit shot by an East London forward crept over the line to make it 0-3. Thurrock changed their formation with midfielder Tom Madden joining forwards Fleming and Lawrence Smith and began to exert pressure on the visitors. When midfielder Lawrence Jackson intercepted an East London pass he skilfully dribbled through the defence before shooting from the edge of the D for what looked a certain goal; however the ball went inches wide. With five minutes to go East London were awarded a short corner from which they added a fourth goal giving them a win which sees them rise to second in the table with Thurrock six points behind in fourth place.

Next league game away to Colchester V, January 16, 2.30 start

Thurrock were extremely unlucky to lose this game against one of the NE14 sponsored Hockey League’s pace setters this season. Canterbury took the lead midway through the first half against the run of play from a thundering penalty corner strike despite the best efforts of Thurrock’s goalkeeper Karen Richardson. The home side responded well and posed threats from Jo Taylor on the right wing and from the driving runs of Miriam Nichols and Tessa Ing from midfield. Their well deserved equaliser came from a penalty corner of their own which was won after some good work by Ing. Nichols’ initial shot was saved by the goalkeeper but Nicola Pugh reacted quickly to flick the ball in off the post. Thurrock had further chances to score in the second half with Nichols and Katie Jacks both going close with solo efforts. At the other end, Canterbury ’s attackers were well thwarted by the Thurrock defence of Louise Parrott, Sally Ellis and Carol White and even a harshly awarded penalty flick was well saved by Richardson . Thurrock’s hearts were broken in the last 30 seconds of the game when they failed to clear a Canterbury penalty corner and the ball was forced home at the near post. Thurrock will hope to bounce back when the second half of the season resumes after the Christmas break.

Next match home to Colchester I, 9 January

The first four minutes were all Thurrock, then an initial foray into our half brought a short corner for Southend, and a well struck shot saw us one down. Then their star player took control, probably the best individual performance seen this season saw her run the game for almost the whole of the first half. Two further goals and we were three down at half time. An excellent half time team talk saw us much more competitive. Their star player was marked out of the game and forward Becky Grant made four excellent runs which saw us go close to scoring. It was not to be and the game ended 3-0. We remain eighth in the league and with so many young players this season’s experience will stand them and the club in good stead for the future.

Next game away to Waltham Forest II, January

Next game home to Waltham Forest III January 9, 11 am start

Police probing incident in Tilbury after fences destroyed by fire