This top of the division clash against the unbeaten and runaway leaders combined the individual hockey skills of Plashet and the energy and drive of Thurrock to provide one of the most exciting games of the season. Within two minutes of the start a good attacking move by Thurrock resulted in a short corner. Jacob Agoro, undeterred by the advancing Plashet players, lifted the ball into the top of the net and Thurrock took the lead. The game progressed with both sides creating a number of good opportunities but Thurrock were beginning to take control when a defensive error resulted in a short corner for Plashet, who took full advantage levelling the score at 1-1. At this point Thurrock lost their composure and lost control and conceded a further two goals making the score 1-3 at the break. 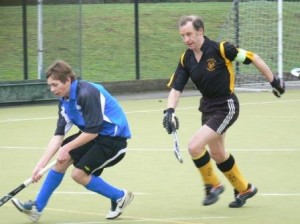 The home side started the second half with renewed confidence following some straight talking at half time. However a break by Plashet provided them with another goal. At 1-4 Thurrock had a mountain to climb but they continued to fight and a long ball was picked up by Steve Abbott (captain) who skilfully took the ball around the keeper bringing the score to 2-4. They began to play some of their best hockey from defence to attack resulting in a number of short corners. Up stepped Jacob Agoro and the score was 3-4. With the players arriving for the next game the excitement grew and T’s raised their game giving Jacob Agoro the opportunity to score another penalty corner and complete his hat trick to bring the score to 4-4.

Two Plashet players expressed their frustration and received yellow cards. With a few minutes to go and Plashet down to nine men, Thurrock launched a number of attacks but the opposition tightened their defence and Thurrock were unable to take advantage. Plashet returned to full strength with two minutes to go and launched one final attack to make the final score 4-5 in the dying seconds.

This result keeps T’s in second place, two points ahead of East London. Third placed Chelmsford losing 3-1 to Havering IIs and dropping down to fourth.

The mid season break has been hard on the IIs, with four regulars picking up what could be long term injuries. Add to this call ups to the 1s and other key players’ unavailability, and any team is likely to struggle. Upminster should be a team that Thurrock can compete with, but on both occasions this season the IIs have been heavily defeated, however on another day no fewer than four of the home side’s goals might not have found the backboard, such was Thurrock’s luck on Saturday.. That’s not to take anything away from Upminster though, their forwards worked hard all game and made their own luck by being in the right place at the right time.

Thurrock are going to have to find somebody to fill in for the destructive Gary Venus in the holding midfield role while he recovers from a dislocated knee. Too many of the opposition’s attacks went unchallenged at the point where he would usually break them down, and with the reliably strong Wapping visiting Palmer’s this week, and only two recognised defenders available, the T’s are in for another tough Saturday.

Thurrock started this NEI4HOCKEY Div 9 SE from the start and after five minutes Michael Fleming hit the post. Soon afterwards Lawrence Smith collected a pass from Matthew Skinner and dribbled through the Southend defence before shooting from the edge of the area, however the alert keeper managed to tip the ball around the post. Thurrock pressed the visitors into defence and gained a string of short corners but were thwarted by the in-form keeper until, after 20 minutes, Liam Birch seized on a pass and flicked into the net. Despite pinning Southend into their own half, Thurrock were unable to add to their total by half time. In the second half, Thurrock maintained their thrust and the Southend defence had to pull out all the stops to keep them at bay with both Birch and Skinner hitting the post. Eventually Thurrock gained their reward when, in the 58th minute, Michael Fleming received a pass from Harry Holloway and smashed the ball into the net to make it 2-0. Thurrock continued their domination but were unable to increase their score.

The second half of the season began well for Thurrock’s first string with an unexpected but well-deserved win against a West Herts team who are in the top half of the NE14 Hockey sponsored Women’s East Premier League.

The home side started strongly and enjoyed some good attacking possession, whilst keeping the skilful opposition forwards well contained at the back. With the half-time score at 0-0, Thurrock were confident they could get something from the game and this proved to be the case as early in the second half they took the advantage with a powerful penalty corner strike from leading goal scorer Miriam Nichols.

Tees continued to press in attack and the all important second goal came after a right wing cross from returning player Gemma White was well dispatched at the second attempt by debutant Kristina McCann. Thurrock will hope to continue their good form as they travel away to Cambridge University this Saturday.

It is always much sweeter when one of the minnows beats the big boys. Well what a great result for the girls on Saturday. The team completed their first double of the season with a goal from Katie Johnston. Dominating much of the first half, Thurrock were only susceptible to breakaway attempts from their fast forward line. But excellent work from the defence and two fine saves from goalkeeper Ali Hadley meant we were all square at half-time. The domination of play seen in the first half continued for the first 15 minutes of the second, which saw us score from a defensive error. The remainder of the match was backs against the wall defending, with Old Loughts failing to capitalise on a number of short corners. We managed to keep a clean sheet, a welcome victory taking us to mid table.

This Saturday home to Crostyx II, 11 am start

This Saturday away to Harlow II