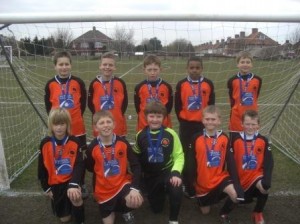 Thurrock Primary School’s District Football team represented Essex in the regional round of the National 7-a-side tournament on Saturday and did Essex proud. Organised by English Schools’ FA, the tournament brought the best districts from across the south of England against each other to see who would represent the area in the National Finals in May. After successfully beating other districts from Essex in November, Thurrock went to Greenwich to compete against 6 other districts. The quality of football was high and after remaining unbeaten for the first 5 matches, Thurrock had to beat Bexley to be crowned champions. However, despite being so close to winning, Thurrock couldn’t remain unbeaten and Croydon were the team that were successful in representing the South of England.

Kevin Watts, joint manager said, ‘It was so disappointing to get so close and not win, but the whole squad of players represented not only Thurrock but also Essex in an excellent manner. Their behaviour, attitude and commitment was first class and demonstrated what talent there is in the Thurrock team.’

The team, which selects the best players from all of Thurrock Primary Schools, are having a great season; being second in the Essex league and still in three cup competitions. Out of the 14 games played this season, the team has only lost 3. John Bryant, joint manager said, ‘The team are playing well at the moment and are looking forward to taking part in the FA endorsed football of festival in Jersey at Easter.’