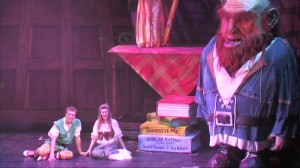 To celebrate their first 30 years, Lightnin’ Drama Group presented “ Jack and The Beanstalk” at a packed Queens Theatre in Hornchurch last week.

This was a lavish production with expensive props and effects so they had to sell seats and they did so in spades. Not a seat in the house for the Friday and Saturday shows so well done to all the team for getting those seats filled.

Sue Ospreay not only directed and produced this show but also ripped the script apart to give it that Lighnin’ touch.

This was a spectacle with the use of colour ,innovation and movement in abundance and Lightnin’ are very good at doing this . There is so much activity on stage that the viewer is never allowed to get bored. There were some strong performances here as well. Luke Coldham generated all the necessary boos he could muster and gave a superb interpretation of his character Grim, who is the shows villain.

I always admire the work of Annie Elsely, she excelled at the Thameside earlier this year, and she played the pantomime dame with vigour and professionalism. In fact all the leads gave good performances and the crowd were disciplined and well rehearsed. Some of the singing performances were a little off key, shall we say, but it didn’t matter ,the kids watching, loved every, its behind you moment.

The star was of course the giant and Tony Yard manoeuvred the 14ft high monster around the stage with skill.

One Response to "Jack’s Back"