Valiant Effort For the T’s 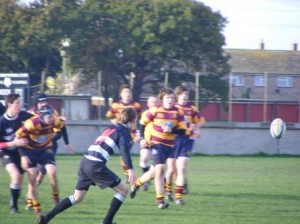 Thurrock under 15s played against Westcliff on Sunday 7th September in the Essex cup qualifying round.  Westcliff have always been the stronger team and T’s knew that they would have to pull something special together to stand a chance against them. They showed that they are 100% committed to the the game and the team  played some outstanding rugby on the day, leaving Westcliff in a vulnerable position of having to defend against  T’s.

T’s kept  applying the pressure but couldn’t break through Westcliffs strong line of defence, and the play quickly shifted to Westcliffs advantage putting them on the score board first.  T’s heads didn’t go down they kept their focus and the pressure on with a few trys being held up on the line. T’s Arri Pluck,  Ryan Wilkins, Adam Children and Charlie Harris put in some outstanding tackles stopping Westcliff in their tracks and gaining the advantage.

The fast feet and quick thinking of Jordan Edwards, Jack Dinnadge, Chris Vandy, and Sean Bunney saw T’s making up ground edging themselves closer to the equaliser, which was soon to follow with the the ball finding the hands of T’s Wyatt Halliday he out stepped and out manoeuvred the Westcliif defence to touch down a fantastic try.  The Thurrock lads showed Westcliff they were no longer the under dogs with two thirds of the game being played in their 25 and having the advantage of possession,  Westcliff had a strong line that T’s couldn’t penetrate to gain the advantage on the score board.

With the score standing at a draw, the game could have gone either way as both teams were deserving winners on the day, but the rules state the visiting team win on default, seeing the Thurrock lads out of the cup.