Mr Vinall and seven members of Palmer’s staff took part in Movember last month, each cultivating an impressive moustache to raise money and awareness of men’s health issues such as prostate cancer, and raised over £1000.

For the privilege of removing the Principal’s moustache, the Palmer’s Student Executive, led by President, Peter Johnston, donated an extra £50 to the total.

Mark Vinall, Principal, said, “This was a fantastic event to be a part of, and I’m really pleased that the students and staff got behind us and donated so much money. I’d like to thank the Student Executive for their extra donation – I hope the money we raised at Palmer’s will make a difference.”

Movember team leader and music teacher, Andy Mayell, commented, “I was impressed with the team’s mo growing efforts, and I’m delighted that we beat our £1000 target!”

Peter Johnston, an A-level student from Purfleet, added, “It was great to be involved with the staff in such a fun event, and the Student Executive was happy to contribute to such a great cause.” 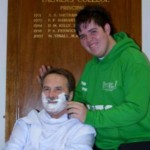