ANYONE who has seen chair of Thurrock Arts Council, John Scowen organise the Thurrock Drama Festival will attest to the amount of hard work John puts in to keep the annual feast of amateur dramatics running.

John has been involved in the arts scene in Thurrock for over forty years. Recently, John joined some of the East of England’s unsung and previously unseen cultural heroes as they, along with John were honoured at a reception at Hylands House, Chelmsford.

Essex Arts & Business created the Cultural Champions programme. It recognises the achievements of real people helping local communities through the arts. Giving their time, money or expertise (and often all three) hundreds of people make a huge contribution to the cultural life of their towns and villages every week. 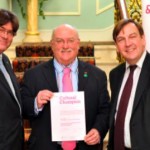 John Whittingdale, OBE MP for Maldon & Chairman, House of Commons’ Culture, Media and Sport Select Committee presented the Cultural Champion awards. Mr Whittingdale said, “As Chairman of the House of Commons’ Culture, Media and Sport Select Committee, I have been closely involved in the debate about the future funding of our Arts and Heritage. I am very conscious of the huge amount of time, effort and knowledge that so many give to support their local arts and culture without which many events, organisations and institutions simply could not continue. The Arts and Business Cultural Champion Programme is a fantastic way of recognising their generosity and publicly thanking them. As an Essex MP, I am particularly delighted to be associated with this event and to add my thanks to those who have done so much for culture in the East of England.”