RAIL fares are being raised across the borough this week at a level well above the rate of inflation, hitting commuters hard states Thurrock Labour.

As season ticket prices increase by an average of 5.8% across the country, in Thurrock an annual season ticket from Tilbury, Grays, Chafford Hundred and Ockendon now costs £1920 and costs over £2300 from Stanford-le-Hope and East Tilbury.

Labour’s council candidate for Stanford West Gemma Robbins said, “As someone who regularly travels into London for work, I know what a big difference this will make to me and the hundreds of others who commute from Stanford-le-Hope.

Carl Morris, Labour’s Parliamentary Spokesperson said, “This is just another example of the government making it harder for working people. Many in Thurrock rely on rail links with London and this increase in fares will leave them out of pocket” 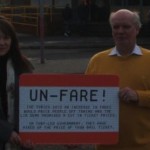