Hughes of Bellmaine Avenue, Corringham, has been removed from his post as group leader for the Second Stanford-le-Hope Scout Group. 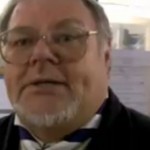