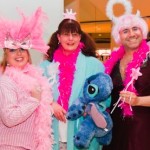 As the name suggests, the walk began at midnight, but the fun began earlier in the evening with goody bags, Magic from Paul Clancy, pampering treatments from Sunflowers Tanning & Beauty, Clinique Basildon & Emma’s Herbal Healing plus live music and entertainment from Crazytown Entertainment DJ’s and signing group sensation Stiletto and an energetic warm-up courtesy of Jazzercise in Thurrock.

Even after the laps of the centre (which were surprisingly speedy in their heels!) participants could relax with pizza from Pizza Express and more live music from Michael Buble Tribute Act – Kriz K, and foot massages courtesy of The Holistic Treatment & The Little Retreat, with the ladies finally comfortable that they had raised lots of money to support all the hard work undertaken by the hospice.

Some came in slippers, some in stilettos, some in drag and some in curlers. Some were walking in memory of someone special who had received support at the hospice.

A Hospice spokesperson said: “A big thanks to all that participated and to the volunteers on the night without your help it wouldn’t have been possible and also thank you to Brentwood Communications for the lending of much needed walkie talkies and to Lakeside for the hire of the venue.

There was also a fantastic raffle with prizes from Curves Corringham, Toni & Guy, Elemis, Boots Basildon and many more… Not all the prizes have been claimed so if you have the raffle tickets: Pink 924 or Pink 965… Get in touch by the end of the week!!

If you have any sponsorship that needs to be handed in please can this be done by 28th February 2011 – the two highest individual fundraisers win lovely prizes!!