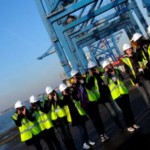 o commemorate the 125th anniversary, an Open Day will be held at the London Cruise Terminal on Sunday 17th April where the students’ work will form part of an exhibition of photography of a modern diverse port, contrasted alongside archive photographs of traditional dock workers.  A project on twilight photography from local artist, Maureen Holley, will also be exhibited. Jonathan Catton, Thurrock Heritage & Museum Officer, is supporting the event with displays from the museum, presentations and Pathe News Clips.

The history of the Port dates back to July 1882 when the East and West India Dock Company’s Bill sanctioned the construction of the new docks at Tilbury and the ceremonial cutting of the first sod of earth took place.  Over 5,000 men and boys were employed on the dock construction and on 17th April 1886 the new Tilbury Deep Water dock was opened by Mr Dobree, Chairman of the East and West India Dock Companies.

Continued development and investment over the years has ensured the Port of Tilbury remains London’s major port providing fast, modern distribution services for the benefit of the south east of England.  It is the UK’s leading paper handling port and has a strong position in containers, bulk commodities, construction and building materials.  Tilbury’s strategic location on the River Thames, makes it the natural point for distribution for developments such as the 2012 Olympics and the Thames Gateway. Serving the UK’s market for forest products, general cargo, vehicles, grain and other bulks, the port offers customers excellent transport links to and from the capital and across the South East.

Kerry Baker, Head of Photography at Palmer’s College, said:  “We are grateful to the Port of Tilbury for enabling the students to have access into restricted areas to capture on camera the skills necessary for a variety of modern day operations in the Port.  The students have produced some amazing work which has been linked into the A level curriculum.”

Port of Tilbury’s Lynda Viccars, who inspired their visit and escorted the students along with Port colleagues, said: “It was a pleasure working with Palmer’s College on this exciting project which gave students an excellent opportunity to experience life beyond the Main Gate.”

Proposals for the Port’s Open Day event are currently being progressed and further details will be announced shortly.