Youths sought after attack on train 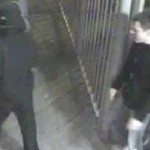 Investigators have also released a CCTV image of two men they would like to identify and talk to in connection with the the incident, which took place just before 6.30pm on Sunday, 16 January.

“The victim, a 17-year-old man from Shoeburyness, had boarded the 18:24 service at Stanford le Hope, bound for East Tilbury.

“A short while into the journey, the victim was approached by two men who asked him to hand over his wallet and mobile phone.

“When the victim refused, the men threatened him, but still the victim managed to resist handing over his belongings.”

Soon after, the train arrived at East Tilbury where the victim left the service but the men remained on board until the next stop, Tilbury Town.

DC Bishop added: “Following the attack the victim was left unharmed, but understandably was quite shaken by the ordeal.

“We are making local enquiries as part of our investigation and I am asking any members of the public who may have witnessed the attack, or who have information about the people responsible, to come forward.”