SOUTH Basildon and East Thurrock Conservatives held a No2AV action day on Saturday. Over 5000 leaflets were delivered across the constituency to campaign for a ‘No’ vote in May’s referendum on whether to replace the current First-Past-The-Post voting system with the Alternative Vote.

Stephen Metcalfe, the Member of Parliament for South Basildon and East Thurrock, who is heading the campaign locally said “The current voting system where the person with the most votes wins is simple and fair. AV is overly complicated and can be very unfair, especially to the vast majority of voters as it causes some people to get one vote while others get two.

“There are many problems with AV, with it being estimated that the change to AV will cost up to an additional £250 million. This is because local councils would have to waste money on costly electronic vote counting machines and expensive voter education campaigns. With ordinary families facing tough times can we really afford to spend a quarter of a billion pounds of taxpayers’ money bringing in a new voting system? Schools and hospitals, or the Alternative Vote – that’s the choice in this referendum.

Additionally, the winner should be the candidate that comes first, yet under AV the candidate who comes second or third can actually be elected. That is why it is used by just three countries in the world – Fiji, Australia and Papua New Guinea. Voters should decide who the best candidate is, not the voting system. We can’t afford to let politicians off the hook by introducing a loser’s charter. 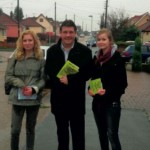