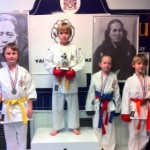 Chief Instructor Sensei Richard Hang-Hong, a 3rd Dan black belt and international kata and kumite champion said: “I’m so proud of all the kids in our team. They had very little time to prepare for this tournament and yet they still came out with some great results, especially Zoe who has never competed before! I can’t wait to see even more successes from her and the rest of the team throughout this season.”

The juniors were coached by Sensei Richard along with their senior team mates Samuel Parker (from Tilbury) & Martin Lawrence (from Chelmsford).

Classes in Seitou Ryu Karate run all year round across Grays, South Ockendon, Wickford and Chelmsford. With over 150 currently active members training throughout these areas, it is suitable for everyone from five years old upwards, with separate classes for all ages and abilities. For more information about classes please contact Sensei Richard on 07899 827476 or visit the club website; www.seitouryukarate.com