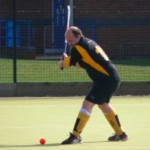 The second half began where Thurrock left off with a great strike from Christian Jenkins. Matt Gaut scored his first of the game with a great finish. Thurrock was unlucky to concede a goal when a shot was deflected past goal keeper Andy Gaut. Tees continued to push with some great play in the midfield from Matt Leaver and Nick Stapleton and another goal from Nick Sheard made it 5-1. Thurrock scored two more goals to make it 7-1.

This was Thurrock’s best performance of the season, with two games left to play Thurrock are five points clear at the top and another win would make Thurrock champions.

Thurrock are at Palmers facing Clacton on Saturday 2pm start.

The Twos faced Waltham Forest on Saturday, who back in November were the last team to beat them before Thurrock’s amazing stretch of victories saw them climb to the top of NE14 Hockey Div 6SE. Last time round the Twos only had 10 men available, one of whom was carrying an injury. This time, with Thurrock just two wins from clinching the title, a full strength side was sent out with revenge on their minds.

Waltham Forest almost went ahead when the ball ended up in the Thurrock goal, but the visiting forward sportingly owned up to kicking the ball and the goal was scrubbed from the scoresheet.

Michael Murray opened the scoring for the Tees on 20 minutes with a strong shot on the turn. At the break the Blacks were two up thanks to another goal from Murray.

Thurrock were very comfortable in the second half, with Murray, Declan Millane and Rick Smith grabbing two more goals each. Waltham Forest managed to get one back from a short corner, but they rarely threatened the league’s meanest defence.

With bottom of the league Clacton withdrawing late in the season, the Twos match next week is their last of this long and successful campaign, and a win at third placed Maldon & Little Baddow would ensure that at least one piece of silverware was heading to Thurrock.

Thurrock met the team that occupied third place in NE14HOCKEY Div. 8SE and came out 4-2 winners earlier in the season, however this game was not going to be as easy for the visitors. Thurrock started strongly and put the Upminster defence under early pressure with Michael Fleming shooting inches wide.

After 10 minutes Jimmy Venus netted after collecting a measured pass from Himesh Patel. Five minutes later Matthew Skinner made it 2-0 when he scored from close range after seizing on a pass from Gary Venus. Thurrock were then reduced to 10 men following an injury to the skipper and Upminster took full advantage to turn the game and subject Thurrock to a wave of attacks which defenders George McAllister, Sam Webb and Rick Clubb did well to thwart and reach half time without conceding.

The second half saw Upminster playing the better hockey and Thurrock having to work hard to hold them in check. Midway through the half, against the run of play, Thurrock gained a short corner which was pushed out to Jimmy Venus. He played a quick interchange with Fleming before rifling the ball into the net for his second goal.

Thurrock were buoyed by the goal and revived their earlier form to push forward and force Upminster into conceding a string of free hits. With five minutes to go Liam Birch added a final goal after dribbling through before flicking pat the advancing keeper.

Away to Old Loughtonian Woodsmen at 11.30 am on Saturday

This friendly game provided an opportunity for Thurrock’s new young players to experience senior hockey against a team that has just been promoted from NE14HOCKEY Div.9SE. In midfield Joe Harvey, Tom Archer and Will Davis worked hard to cut out Upminster’s pay and provide ammunition for George Horgan who weaved through the visiting defence with ease only to be thwarted by an in-form keeper who made a string of acrobatic saves.

On the rare occasions that Upminster broke through, defenders Declan Salmon and Sam Webb were alert to cut out the danger and move the ball back up the field. When these two teams met in December, Upminster dominated the game to win 3-0, so the score is a measure of how much Thurrock have improved in only their fourth game at senior level.

A game full of action and passion as the ladies were determined to gain a win. Captain Tess Eng as usual tried to galvanise her team into action but eventually the defence let in two goals.Again the ladies only conceded defeat once the final whistle was blown. Lou Parrott was player of the match.

Thurrock began magnificently and indeed were causing the opposition all sorts of concerns and the triangular play of Meera Sud, Sally Willett and Karen Lucking was proving to be very dominant and were so unlucky not to make their dominance pay off. At half time the ladies were delighted with their performance and old Loughts were truly frustrated. Unfortunately T’s were on the receiving end of a very determined performance and despite some impressive saves from ‘on form’ goalkeeper Karen Richardson the ladies could not keep out the ever threatening attack.

The ladies had yet another new line up with Nicole Brown making her debut and what a performance! Brown impressed her new team mates with some fine penetrating runs and consequently was named as player of the match. The ladies had a very difficult first half and found themselves three goals down at half time.

The second half opened with T’s attacking the complacent Old Loughts defence and Brown, Eira Booth and captain Jackie Simmonds both going close to scoring… but old Loughts composed themselves and returned with a breakaway goal. The ladies held the game with some confident defensive play from the ever reliable Debbie Lakey and goalkeeper Kerry Dent.