Ramraiders cause thousands of pounds worth of damage to sports clubs

Police are investigating after a school minibus was stolen which was then used to cause thousands of pounds of damage to two local community premises.

On Thursday evening (April 14) a minibus was taken from William Edwards School in Stifford Clays Road and later found abandoned but seriously damaged nearby. The local Thurrock Rugby Club in Long Lane, Grays later reported major damage to their club house and theft of money and Thurrock Harriers Athletics Club then reported that their premises had been broken into and damaged caused. It is believed that the minibus was used in both incidents to break in. 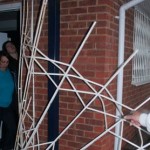 Police in Grays want information about who is responsible for this mindless damage to two well used local community premises. The rugby club is used by pensioner groups, a dance club and around a thousand local people are members.

Police are forensically examining the recovered vehicle and the scene of the two break ins. Anyone with information is asked to contact Ds Steve Cunningham at Grays police station on 0300 333 4444.