A message of thanks from the new Deputy Mayor: Cllr Yash Gupta 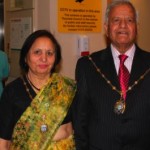 Cllr Yash Gupta was elected the Deputy Mayor of Thurrock at the full annual council meeting on 25th May, 2011. He is the first Asian to achieve this honour in this Borough where the Asian population is less than 3% of the total population.

Cllr Yash Gupta and his wife Pushpa would like to thank every one for their help and support to achieve this honourable position.

Cllr Gupta was elected a Labour Councillor in 1996 again the first Asian to be elected to this Council. Since becoming a Councillor he has been very active inside the Council as well as in the local community.

He chaired various Committees and Scrutiny Panels for improving the local services. Last year he was a Cabinet Member for the Environment.

He is also a governor of two local schools. He and his wife Pushpa are involved with various community groups, helping to improve community cohesion and community well-being.

Cllr Gupta was awarded MBE by the Queen in 2006 for his services to the local communities in Essex. In 2008 he was awarded Glory of India award by the International Friendship Society for his work to strengthen relationships between India and the U.K. He won a National Award as the Community Champion Councillor of the Year from the Local Government Information Unit in 2010.