South Essex College celebrated the sporting achievements of its Thurrock Sports students in an awards ceremony held at the Thurrock Campus last week.

Sports tutors of the College awarded the students with accolades ranging from Player of the Year to more light-hearted awards including Worst Dressed and Moaner of the Year.

Overall Player of the Year went to Level 3 Extended Diploma Sport student Bradley Vaughan, 18, from Tilbury. Course Leader and Head of Football Academy at the Thurrock Campus, Paul Vaughan said: “Bradley has been a fantastic student for the past two years and his attendance has been second to none. As well as being captain of the team this year, he has been signed to the Tilbury First Team and been on loan with Southend Manor this year. He is an excellent footballer and has used this college experience to develop his skills as a player he’s done really well.” 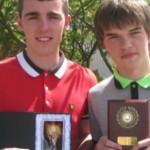 Of winning the accolade, Bradley said: “It felt good to win but I wasn’t expecting it because there are lots of great players in the team. I’ve really enjoyed the year; the course has really helped me to develop my football skills.”

Bradley is hoping for a career in Sports Science or Teaching and will be continuing his studies at South Essex College in September after enrolling on the BSc Sports Studies degree.

Academic Student of the Year was won by Level 3 Extended Diploma Sport student Luke Pitty, 18, from Grays. Paul said: “Luke has been a dream to work with; he’s an excellent student with 99% attendance and all work he produces is of distinction standard. He’s an excellent footballer but also a very good student who works very hard.”

Awards were also given out for Player of the Year for each first, second and third team which went to Bradley Webb, 17, from Tilbury, Jordan Odofin, 17, from Ilford and Abraham Osinoki, 17, of Romford, respectively.