THE SIGN IN THE window of the Cutting Edge Hair Salon on Brentwood Road, Chadwell St Mary states: “Only English Spoken On These Premises”.

It has always been rumoured to be some form of urban myth that there are various hair salons with similar signs dotted around the borough but to this date, nobody could give any form of documentary evidence.

We found out that Thurrock’s anti-racism organisation TRUST had already been up to the shop.

A spokesperson said: “Thurrock Council’s Environmental Health contacted TRUST to check the shop in Chadwell St Mary who had a notice on her window saying “Only English Spoken On These Premises”. They felt it constituted racism. We went to visit the owner/manager who was very unhappy about the visit and quietly aggressive.

“She stated very clearly that she was not breaking the law as the wording was approved by her barrister and she was not prepared to take the notice down. As we are not an enforcing agency we contacted environmental health and suggested that they contact Corporate Diversity for further advice.

YourThurrock has spent over a week contacting the Diversity Unit but have had no response.

We visited the shop. The one person working there refused to give their name or the name of the manageress/proprietor. We gave them our card and requested an interview but have not heard back.

One legal expert said: “It could be interpreted as a piece of public information. Of course if you follow it logically, if you can’t speak english then you are hardly going to be able to understand the sign. So, it does beg the question as to who is the sign designed for.” 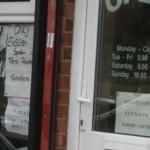