Photo released of man wanted after Tescos robbery in Chafford

POLICE have issued a CCTV pix of a man they want to question in connection with a robbery at Tesco Express in Chafford Hundred last week.

Police were called to Tesco Express, Drake Rd, Chafford Hundred around 7.20pm on Thursday (July 14) after a man entered the store with a hammer and fled the store with cash. Staff and customers at the store were left shocked but no one was injured.

The man is described as white, early 20s about 5ft 10ins tall. He was wearing a multi coloured jacket and jogging bottoms. 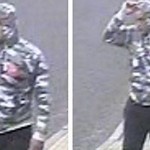 Detectives want to hear from any witnesses who have not already contacted them, or anyone who recognises the man in the photo. They should contact Dc Scott Kingsnorth at Grays CID on 101, 0300 333 4444 or Crimestoppers.