Fun days out at childrens centres

DOZENS of young people made a mess, had their faces painted and generally had great fun at the Ockendon Children’s Centre on Thursday (11 August).

And much the same happened on Friday at the Tilbury Children’s Centre Forum’s fun day on the Anchor Field.

Children’s centres across Thurrock have been inviting young children and their parents in over the summer, celebrating their work in the community and offering a bit of fun and relaxation as well.

Mayor of Thurrock, Cllr Charlie Curtis, was at the Ockendon event and took the chance to join in the fun — although he did not have his face painted!

Speaking at the event, he said: “Thurrock Council is currently consulting local people about the future of children’s centres in the borough. We want the public’s help in shaping their future.”

And mayoress, Cllr Wendy Curtis added: “It is important that local people use these centres. This one is in my ward and often when speaking with people living just a few yards away they don’t know what’s here in Afton Drive.

“These centres are important and can offer all sorts of help and assistance to children and their families as a whole, but if they’re to succeed, people must take advantage of what they’re offering — use it or lose it.”

The Ockendon event — including messy play, a swop shop, outside sports and a raffle — was one of three being organised by the Lakeside Cluster. The first was at the Aveley Children’s Centre on 2 August, and the next will be at the Purfleet Children’s Centre on 19 August.

Hundreds of young people came to Anchor Field on Friday (12 August) for the Tilbury Children’s Centre Forum fun day. Among the entertainment was the Elite Dance Academy, raffles and tombolas as well as plenty of help and advice stands. Residents wishing to take part in the children’s centre consultation (which runs until 2 September) can access it in the following ways: through the website (www.thurrock.gov.uk); or by picking up a consultation form at your local library, health clinic or children’s centre. 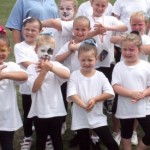