Couple robbed of £20k watch at home by armed robbers

DETECTIVES in Thurrock have released CCTV images of two men who carried out an armed robbery about 6.30pm Friday, September 9 in the Windsor Avenue, 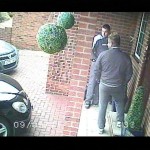 A woman aged in her early 60s was forced to hand over a gold Rolex watch, with a diamond encrusted bezel worth around £20,000, when her partner was threatened with a shotgun.

The partner answered a knock to the front door when he was confronted by two men, one of whom had a shotgun or rifle, who demanded cash and jewellery. The other man then brought the woman victim from a bedroom where she was forced to hand over the watch when the robbers threatened to shoot her partner.

The robbers then ran from the premises and got into a car, possibly a light grey Ford Focus. Neither victim was harmed other than being traumatised by the event.

The men are described as both white and in the 20 to 40 age range.