Copeland Colts Under 6 teams showed that “playing fair” is a winner!

THE Thundermite League provided a fantastic tournament open to all teams of year one children where the order of the day was sportsmanship and points were awarded to teams for “fair play” and goals were not counted in line with FA guidance for children competing under the age of seven.

All players received a medal.

Copeland entered two teams and had a great time playing against teams from across the county.

The team trains on Saturday mornings at 9am at Stanford Primary School and is particularly looking for girls and boys in Year 2 who would like to join it. Just come along! 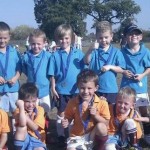