Thurrock Lawn Tennis club recently hosted the finals of their club championships. The matches were played over two weekends and produced some entertaining and competitive matches. The overall winners were:- 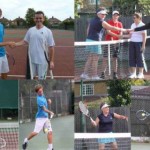 The club would like to congratulate the winners and all those who participated in the club championships, and to also thank those who came to support the players during the finals.