Vampires at The Thameside

Vampires at the Thameside!
When night falls and the moon slides behind the dark threatening clouds and you hear a wolf howl in the distance do you dare venture out? This is the time when the Vampires come out. Oh no it isn’t though! Not the ones from Uberwald, oh no! These fiends can stand daylight, garlic, holy water, and will hypnotize you into their slave and then suck you dry any time of the day simply if they feel like it! Never come across these before? Scared and shocked? So are the people who live in the Kingdom of Lancre in Discworld, about a group of power hungry vampires hell bent on taking over the Kingdom of Lancre, Discworld. These guys don’t play by the rules and their servant Igor is fed up with them too! To Igor’s horror, the modernizing De Magpyr vampire family make him oil the hinges of the castle door to stop its spooky creaks and squeaks! Can you imagine?
Don’t worry, you’re quite safe, well as long as you don’t look in their eyes, because it’s all to do with a rip roaring comedy based on Terry Pratchett’s bestselling novel Carpe Jugulum (Adapted for the stage by Stephen Briggs), also the title of the play, is coming to the Thameside Theatre starting tonight 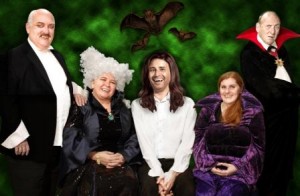 (Thurs 13th- Sat 15th).
Presented by the multi-award winning Thurrock Courts Players, everyone will love the antics of the vampires, the bold heroics of the witches trying to stop them and poor man-servant Igor’s attempts at reliving the glory days when vampires had real bite, and played by the rules, like turning into dust in sunlight!
See for yourself and book your tickets now from the Thameside Box Office: 0845-300-5264 (Adults £8, Concessions £6 – curtain-up 7.45pm)
No Crucifixes or garlic will be allowed in the auditorium (it puts off the old fashioned vampires).
See you there –if you want a scare!!!! Mwa ha ha ha ha!
—