FIREFIGHTERS rescued a hawk which had become trapped in a tree hanging by its jess – the leather strap used to tether hawks.

Initially an officer was sent to Belhus Parl yesterday afternoon (Sunday) to assess the situation and fearing the bird could die or the owner hurt himself by trying to rescue the bird himself he requested a fire engine at 14:57hrs

Crews used a ladder to reach the hawk and had it safely back on his owner’s arm by 16:05hrs.

Station Officer Phil Pidgeon said: “The owner had taken the hawk out for a fly in the park and the wind had taken it into the tree where its strap became tangled round a branch leaving the bird hanging upside down.

“I had real concerns that the bird would die if left in the tree and that the owner could hurt himself by attempting a rescue.

“A firefighter went up a ladder wearing the owners glove and he was able to get a hook around the strap and draw the bird closer and get him onto the glove.

“As soon as the hawk was upright it seemed find and sat on the glove as good as gold allowing the firefighter to bring him back to his owner.

“The hawk seemed fine and we were glad to get him safely down, he is a truly magnificent bird, absolutely stunning, and it was great to see him safely back with his owner.

“It is not often a Pidgeon is sent to rescue a hawk!” 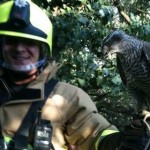