POLICE have released CCTV images of two men wanted in connection with the theft of lead from a dental surgery in south Essex.

The suspects were caught on camera as they walked towards the Street Farm dental surgery in West Road, South Ockendon.

They were seen at 2.54am on Monday August 1 and are believed to have taken lead flashing from four upstairs windows.

Investigating officer Pc Kerri Collins has appealed for information from anyone who can identify the two men or from anyone who saw a vehicle being loaded in the street at the time. Anyone who can help should contact Pc Collins at South Ockendon police station on 101 or call Crimestoppers anonymously on 0800 555111.

Similar thefts have been reported in other areas of Thurrock in recent months. 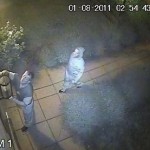 One Response to "Men wanted over lead theft from Ockendon dentists"