Ockendon remembrance service a credit to the community

IT SAYS SOMETHING about a borough like Thurrock, that it takes a while to get through all the remembrance services.

The Remembrance Day Parade and Service in Ockendon was well supported this year with over 300 members of the public, Scouts and Guides taking part.

The Parade started and finished at the Ockendon Scout & Guide HQ in Tamarisk Road marching to the war memorial on the Green.

The Parade was led by the Royal British Legion Eastern Region Band and music on the Green was provided by Thurrock Spectrum Brass.

The service was led by the Rev. Brian Duckworth and his team ministry.

Among the dignitaries there were local ward councillors Amanda Arnold and Aaron Kiely.

Cllr Arnold said: “It was both wonderful and moving to see so many organisations take part. It is a humbling and solemn day.” 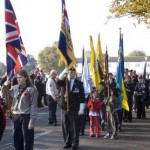 Colin Ward, Group Scout Leader said, ‘We are very grateful to the Ockendon Branch of the Royal British Legion and everyone else involved for making the Parade such a fantastic and well supported event’.