I-Pad stolen in snatch on train at East Tilbury

British Transport Police (BTP) detectives are appealing for information after a passenger had his iPad stolen from his hands whilst onboard a train at East Tilbury. Investigators have also now released a CCTV image of a man they would like to speak to in connection with the incident which took place on Tuesday, 13 September 2011. 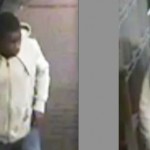 “The 32-year-old victim was already onboard the train – sat in the first carriage using his iPad – when the man boarded the service at Tilbury Town.

“When the train arrived at East Tilbury, the man approached the victim, snatched the iPad from his grasp and quickly left the train just as the doors were closing.”

Unable to retrieve his belongings, the victim completed his journey and reported the incident to police.

DC Bute added: “Thankfully the victim was not injured. However this type of crime is completely unacceptable and has no place on the rail network.

“We are committed to driving down thefts of the railway and I am determined to catch the person responsible.

“I am urging anyone who was on the train, at East Tilbury around 10pm, or who recognises the man pictured to contact police.”