A brand new documentary film is about to be released telling the story of Upminster over the past 1,000 years. “Undiscovered Upminster” is a 60 minute DVD which takes the viewer on a tour around the town looking in depth at the town’s buildings and the people who lived in them.

Upminster and yourthurrock film maker Mike Jones enlisted the help of local historian Richard Moorey who presents the story. The film covers the story of the most influential families who lived in the area over the last six hundred years or so including the Esdailes, the Branfils and also features families from more modern times such as the Abrahams, the Aggiss’ and the Roomes.

Mike said “It a was a hugely enjoyable experience making the film and a great learning curve for me as, despite living in the town for most of my life, I didn’t realise how many treasures that you pass by each day without realising their past. In a little over an hour we’ve tried to cover more than one thousand years of history and show you some of the more interesting buildings – some still standing, some now gone. Upminster has a rich past and the people who have lived here over the centuries have fascinating stories to tell.”

Richard’s in depth knowledge includes the sad story of the Esdailes and the scandal involving the rector that rocked Victorian Upminster . The film will appeal to all ages and provoke the viewer into taking more notice of their local surroundings in future.

The DVD is available to buy from Swan 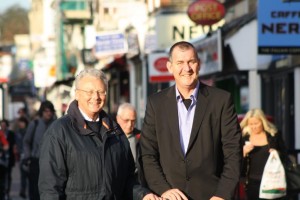 Books and directly from www.undiscoveredupminster.com