A GRAYS teenager has been jailed for six years following a vicious gang-related axe attack outside a courtroom in London.

The court heard that Highgate Magistrates’ Court was sitting in youth court at the time of the incident, approaching midday on Thursday, 1 September this year, when security staff became aware of rising tension between two rival gangs of about 30 youths aged between 15 to 17 years old outside the court.

Security staff recognised a number of the youths from previous cases and attempted to calm the situation down by trying to separate and disperse them. However, the rival groups continued to taunt one another, swearing profusely, calling out names and “flicking their fingers and arms in the air”.

Court users soon became trapped within the court, unable to exit due to the disorder taking place as the rival youths chasing each other in and out of the court house foyer.

The defendant, Vangu, then ran towards the court house and pulled an axe from a plastic bag. He raised the axe to head height and chased the victims, Victim One, a 14-year-old boy and Victim Two a 15-year-old boy, who cannot be named for legal reasons.

As he ran he swung the axe towards the pair and then ran back out into the street. CCTV footage of the outside of the court building was shown in which Vangu could be seen chasing the victims in and out of the building while wielding an axe.

Court staff locked the doors of the court, protecting members of the public within the court but leaving both victims on the street and at the mercy of axe-wielding Vangu.

As he attempted to flee, Victim One fell to the floor and Vangu hacked at him four times with the axe, inflicting a deep cut to the 14-year-old’s head, as well as abdominal bruising.

Victim Two also tried to escape but was chased by Vangu who attacked him again with the axe. The court was shown “sickening” mobile phone footage captured by a member of the public in which Vangu could be seen catching up with Victim Two and inflicting heavy blows upon his back with the axe.

Once the defendant had left the scene Victim One was dragged into the foyer of the court house where court staff administered initial first aid. London’s air ambulance was called as he had lost a large amount of blood from the wound to his head. London Ambulance Service also attended and he was taken to the Imperial College Hospital in west London for treatment.

Victim Two was treated at the Whittington Hospital for bruising to his back, inflicted by blows from the axe and being kicked when he was on the ground.

The axe was later recovered by police, hidden nearby in some bushes.

The court heard that Vangu was named as the suspect by security staff at the court who recognised him due to the number of times he had previously appeared at the court.

Judge Morrisson agreed with the pre-sentencing report that Vangu posed a very high risk of causing serious harm to the public and extended the period of license by a further four years to “safeguard the public” on his release, adding: “If you don’t tow the line you’ll be back in jail for increasingly long periods of time.”

Speaking directly to the defendant on sentencing, Judge Morrisson said the fact the “injuries sustained were not as serious as they could have been” was “a matter of very good fortune for them and as a consequence for you.”

“It was in public, a sustained attack in public, not only outside, but in a public building where people are entitled to go about their business without being frightened witless, as they would have been.

“It was an axe that you wielded, it’s quite clear that it’s a potentially lethal weapon.”

Detective Superintendent Gurdip Singh, in charge of Haringey CID, said: “The defendant has lived a life of gang culture and violence and has a great many previous convictions for violent offences. He showed complete disregard for law and order or for the safety of any other member of public that may have been in the area while he ran around violently swinging his axe at the victims. The injuries that he inflicted could have been far more serious.

“The weight of the evidence against the defendant left him with no option but to plead guilty at the earliest opportunity. I would like to thank the many members of the public that came forward as witnesses and to acknowledge the work of my officers in collating the large amount of evidence that they obtained in this case.

“I urge anyone that is involved in violence to remember that there are consequences to your actions. Put down your weapons and look to remove yourselves from this lifestyle for good. We will relentlessly pursue anyone involved in violent crime, as this conviction shows. 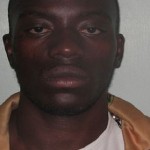 “The defendant made the wrong choice, he ensconced himself in a life of gang violence and has received a significant prison sentence for it.

“If people decide not to grasp the opportunities being provided we will continue to take robust action against them in order to ensure the safety of the wider community.”

Police continue to appeal for information about the other individuals that were involved in the disorder outside the court house in Bishops Road on Thursday, 1 September 2011 and urge anyone with information to call Team 3 Haringey CID on 020 8345 0838 or call Crimestoppers anonymously on 0800 555 111.