OVER £6000, which will benefit a host of local charities, was raised last Friday evening when the local ROTARY club of Grays Thurrock, held their second Christmas concert, at the Civic Hall, Grays. 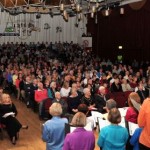 He was joined in this musical ‘extravaganza’ by former Grays Convent pupil, soprano soloist Francesca Fry, the wonderful ‘Mosaic Choir’ conducted by Daryl Barber, and the much acclaimed Aveley and Newham band, directed by Nigel Taken.

But probably the highlight of the evening was the appearance of the Deneholm School choir, and a very dramatic ‘candle lit’ entry to the arena with the popular ‘Deck the halls’. Afterall, they say Christmas is about children, and they certainly ‘up-lifted the hearts of all present in this wonderful old venue.

Of the evening, organiser Ray Smallcombe was elated. He said, “The concert was first launched last year, by the Rotary club of Grays Thurrock, to assist in bringing local talent to the attention of the local folk, whilst raising money for local and deserving causes. With the help of our sponsor, advertisers, and of course the great Thurrock public, we have been able to achieve a sum in the region of £6.000. We would like to thank everyone concerned for their help and support.”

Anyone who feels they missed out on a wonderful evening can get a head start by making a note of next years date, Friday 21st December 2012. We look forward to seeing you there.