LABOUR Party volunteers were out before dawn on Tuesday morning at stations across Thurrock asking people to show their disgust at the train fare rises that commuters faced as they went back to work in the New Year. 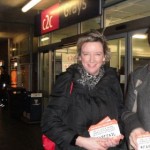 The annual cost of a season ticket from Grays into Fenchurch Street rose by £112. Last week the Campaign for Better Transport (CBT) released figures showing how London commuters are paying up to 10 times more for season tickets on comparable journeys than some European counterparts.

“We wanted to show people there is another way. The Tory-led government has made a decision to push up fares above inflation. The annual cost of a season ticket from Grays is £112 more than it was last year – a massive extra cost for people who are already struggling. And that’s before you add in the fare hikes for the tube as well.

“I saw people shaking their heads in disbelief this morning as they bought their tickets at Grays train station.

Labour says the government should limit the rise to no more than 1% to give people a break. High train fares eat into people’s ability to spend and undermine their confidence to make ends meet, which is no way to get the economy moving.”

“Commuters finding that their rail fares have rocketed by up to 11 per cent will want to know why the Chancellor gave the clear impression in his Autumn Statement that he had limited ticket price hikes to just one per cent above inflatiom. The reality is that the government chose to quietly reverse the decision of the last Labour government to enforce the fare cap and instead gave back to train companies the right to hike fares by much more.

“The fact that David Cameron has chosen to side with the powerful private train operator lobby against commuters and passengers shows he is desperately out of touch with the spiraling cost-of-living crisis facing so many hard-working families.

If this year’s eleven per cent fare hikes were not bad enough, the government has told the train companies that they can increase fares by up to a staggering thirteen per cent in 2013 and 2014, meaning three years in a row of eye watering price hikes.”

Commuters are being urged to direct their anger about the fare hikes towards the Treasury through tweets, texts or phone calls.